A weekend in Northern France | Part I

That France is my favourite country in Europe is no secret, my love for it has been declared several times. For sure, the fame of Paris draws the crowds and the Cote d’Azur has the famous beaches and fancy film festivals. But there’s so much more to this country that every corner would make the ideal place for a weekend getaway to indulge in nature, cheese and some trés bon wine.

Despite living in Toulouse for a year (2009 – 2010), I had never visited the Northern part of France before. Even if our initial plan was to spend a long weekend in Normandy, we couldn’t miss the beautiful city of Saint Malo, so in the end we also spend half a day in Bretagne. But I will talk about that in a later post. At the end of this ‘french series’ I will share a full map guide with all places I dearly recommend.

Normandy is one of the 18 regions of France, administratively divided into 5 departments, out of which we visited 3. The region’s brutal past is visible in its rough architecture and is vividly brought to life by the iconic Mont Saint Michel, a Gothic-style abbey dedicated to the archangel St. Michel and the village that grew up in the shadow of its cold walls. Aside its medieval cathedrals, Normandy’s charm lies in its coastal landscapes and pebbly beaches. Obviously one of the reasons I wanted to go to Normandy is its gastronomic experience. Camembert, cider, fresh fish and seafood are to me enough reasons to spend a slow weekend driving and walking around Northern France.

Cider: a specialty of the North

The strong anglo-saxon architecture could mislead you to expect 5 o’clock teas. But I promise all French delights are there to charm: cheese, croissants and, a specialty of the north, cider. The region has a strong history in growing apples and it seems there are between 500 and 600 cider producers in Normandy. Traditionally it is a welcome drink (at any time of the day), served with peasant food like crepes or galettes. You’ll find local cider along the road, in shops in city centres and in most restaurants.

What i find amazingly interesting is how the French took the humble apple and made a delicious art out of it. Cider is a heavenly drink I can only describe as a champagne of the apple. And what cider producers do not put in bottles, they distill and store in oaken barrels for another delicious, yet stronger apple drink: Calvados. This brandy is so embedded in the history of Normandy (there is even a region called Calvados) that no provincial feast is complete without a small glass of Calvados.

Living in Zurich makes it quite easy to travel around, yet sometimes very expensive. Everything that flies from and to Zurich is twice as expensive compared to all other European airports. The reason is obvious: it is the airport with the highest taxes in the world! Luckily we have our dear Basel just 1 hour away by train. We landed at Paris Orly and we went straight to pick up our car. It was funny how their sales people tried to convince us that for a 1000km trip we would benefit so much more from a bigger car. They did not know that we really wanted our tiny Fiat 500, despite the fact that it wasn’t going to be any Speedy Gonzales.

Our first stop was Versailles and its palace, that I had never visited before. Seeing the enormous queue of hundreds of people discouraged us to visit the inside though, so we went straight to the gardens. At 9:00, only a few people were there. We spent an hour walking around the lively green gardens, imagining how would it be to live in a place where you can almost run a marathon. The trees and alleys were perfectly symmetric, a delight for my Canon. If you do want to visit the palace, book a ticket online (at least one day in advance), it comes with the indisputable advantage of a fast lane.

Our next stop was Giverny, a charming village that was home to Claude Monet for 43 years. At about 80km west from Paris you will find his house and gardens which were left by his son to the Académie des Beaux-Arts in 1966. It became a Museum opened to public in 1980 after completion of some restoration work. Today it is the main attraction of Giverny, bringing half a million tourists every year.

Our initial plan was to book a table at Le Jardin des Plumes, but they asked for our credit card over the phone to confirm. I understand restaurants want to maximise their number of tables, but it still felt very strange so we said no. They didn’t sound very friendly either. So after we parked our tiny car in Giverny, we started restaurant hunting. Avoiding the crowd lead us to Restaurant Baudy where we got a table outside, despite the chilli temperature. Hôtel Baudy was a center of artistic life in the Giverny heyday which was visible from their architecture and vintage interior design. We both took their daily menu which was very good, but too much for me. Do not expect restaurants in Giverny to be anywhere near hipster or fancy. You will find the classical French restaurants, but always with the delicious salade au chèvre chaud or assiette de fromage. After lunch, we had a long walk along the pitoresque village and then started our last drive of the day.

Purely to serve our itinerary, I had booked accommodation in Bagnoles de l’Orne Normandie, a commune in the department of Orne, northwestern France. And we couldn’t be happier about that! I was amazed to discover how surprisignly beautiful and romantic this town was! The Belle Epoque quarter is a great example of a typical early 20th century French burgeoise residential area. Filled with divine villas with polychrome façades, bow windows and unique roofing, a walk around this neighbourhood is a big pleasure.

Moreover, we were incredibly lucky to discver La Grange Bagnolaise, a charming accommodation with 2 double rooms and a superb dining area. Madame & Monsieur Dupin finally saw their dream come true in 2016, when they renovated their house and made it welcoming from guests from all over the world. She did all the interior designer work, carefully selecting antique furniture and decorations that she so beautifully reconditioned. They were both lovely and we are sure that we will stay there again next time we travel to northern France.

I was never a fan of sweet breakfasts, yet it’s what we were spoiled with for 3 days in Normandy. A no sugar diet was almost impossible. But les pains au chocolat et aux raisins sure implied a lot of walking during the day.

Such a beautiful first day in Normandy made us even more excited about our next plans. I usually don’t enjoy spending that much time in the car, yet driving around Northern France is so pretty that this didn’t matter. Make sure to avoid toll roads if you want to enjoy the most of the scenic route.

Getting second post ready about one of the most famous UNESCO places in Europe – le Mont Saint Michel. So, à très bientôt! 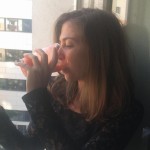 Zürich | an abundance of outdoor activities